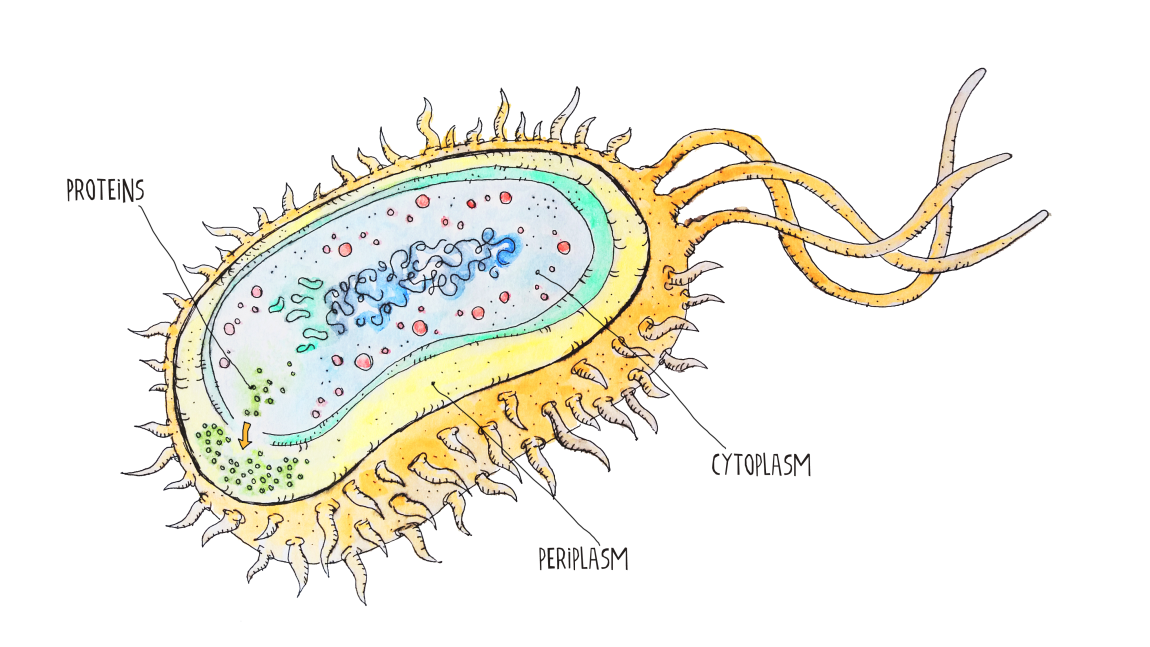 It is well known that expression of many mammalian genes in E. coli can be challenging and lead to low titers. This can be due to various reasons, including rapid degradation of the protein after inclusion body formation, toxicity issues resulting in low growth rate, and aggregation of the protein resulting in complexes with aberrant biological activity.

Two other reasons are sub-optimal translation of the gene and rapid degradation of its mRNA. It is hypothesized that these phenomena can be avoided by fusing sequences to the 5' end of the coding part of the mammalian gene. Whether this ensures more efficient translation initiation because the ribosome is presented with a different 5' coding sequence, because it protects the 5' end of the mRNA from degradation, or other more cryptic effects, or combinations thereof, is unclear.

In Vectron we regularly use two different types of 5' fusion partners for elevating the expression titers (Figure 2): Signal peptide sequences (SP) when the target proteins is to be transported to the periplasmic space, and our proprietary CYT tag sequences when the protein is to remain the cytoplasmic space.

In some cases it is not an objective to have the protein transported to the periplasmic space, and hence signal peptides are unsuitable fusion partners to use for increasing the production titers.

Through the development of Vectron's technologies, fusion partners that has the potential to greatly affect cytoplasmic titers when fused to the 5' end of recombinant genes, have been developed. This are small partners that increase expression without affecting folding. We have named these fusion partners the CYT tags.

One particular CYT tag, the CYT2 tag, seems to be particularly efficient at increasing the titers of many different genes, as can be seen from Figure 4 below. The effect can be substantial. For some genes without a CYT fusion partner, including GM-CSF and G-CSF, the titers is non-detectable, whereas with CYT partners, strong bands are observed.

We are currently applying the CYT technology to customer-proteins and expect to present more data in future newsletters.

To conclude, using 5' fusion partners can greatly increase titers of proteins produced in both the periplasmic space and the cytoplasmic space, and is thus suitable for both soluble and insoluble proteins. It is not possible to predict which signal peptide is ideal for each and every protein, and a screening must be performed to identify the one that is optimal in each and every case.

"The CYT technology is a valuable addition to our expanding vector toolbox. So far, we have seen a considerable increase in both soluble and total protein for the proteins where this fusion partner was tested. By choosing an appropriate cleavage strategy, the fusion partner can be efficiently removed downstream without leaving any nonnative amino acid residues."

Tech Innovations
Vector Expression Technologies for Boosting Protein Production in E. coli
We recently had the pleasure to talk with David from Pharma Almanac, who wanted to know more about Vectron's microbial protein production technologies
Tech Innovations
Soluble production of Proinsulin in the cytoplasm E. coli
Proinsulins are notoriously difficult proteins to produce...
Tech Innovations
Introducing VB Evolution
If every protein is unique, they require unique vectors...
Tech Innovations
Expression Bottlenecks Chapter 1: Suboptimal transcription
The design of vectors for industrial production...
News subscription
Stay up to date with our news, blog posts, and announcements by subscribing to our Newsletter.
Thank you! Your submission has been received!
Oops! Something went wrong while submitting the form.